on July 27, 2009
Saturday morning, Matt and I woke up at 7AM. Personally, I wouldn’t have minded sleeping in a bit later, but we had things to do, and couldn’t let the day get away from us.

My first order of business was to get Lola hustled over to Berry Hill Animal Hospital where her kennel awaited. I felt bad, but on one hand, she’s gotten to go on more trips this summer than not. And on the other hand, we were most definitely not going to have the capacity to bring her with us to the Carpet Capital of the World.

That’s right, ladies and gentlemen. We were headed to Dalton, Georgia.

But first, a quick stop at REI’s Scratch and Dent Sale. We got to the store to find 300 people lined up in front of the store, stretching the entire length of the strip mall. I was intrigued. My father used to work at REI, and I never realized how big of a deal the sale really was.

They let us in, and the order line on the sidewalk had turned into Mass Chaos on the sales floor. People were snatching up parkas and tents and backpacks, clothes and shoes were strewn everywhere. We didn’t find anything we were interested in, but it was still pretty fun.

We made our way down to Dalton in a leisurely fashion and arrived there around 2:00 PM. We chatted with Matt’s Aunt Flora and Uncle Kelly for a long time – then their son Jim and his girlfriend Anna arrived. We had a good time looking at some old pictures, talking about Vincent Price.

Around six, we loaded up all six people and several coolers and headed to neighboring Tunnel Hill, Georgia (the joke being, “I’ve lived here so long, I remember when it was just Hill!”). That’s where Shane and Teresa live with their daughter Hannah and their Chihuahua, Sally and their Pug, Mimi.

They plied us with all kinds of great snacky stuff – Hannah has one of these: 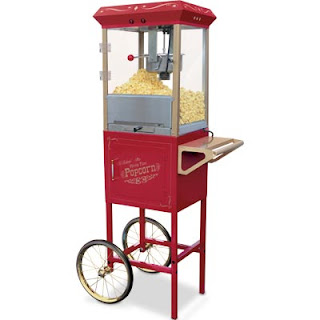 that was put to excellent use.

Shane had planned a Low Country boil for everyone and it was fantastic. I ate, ate, ate and then ate a little more.

After dinner, they fired up the Karaoke machine in the garage. Shane and I are both eager participants. I did my best on “I Will Survive”, “YMCA”, “Blowin’ In The Wind”, “Maneater”, and “Faith”. Matt and Julia did a duet of “Electric Avenue”.

Nickey and Shane slaughtered some Bob Seger, and Theresa tore it up on “Material Girl”.

We left, got back to the house and stayed up with Flora, Kelly, Jim and Anna for awhile, then we all went to sleep – we stayed at the house they got for her sister awhile back and haven’t yet sold. Selfishly, I hope they keep it for a bit, as it’s a nice place to stay. I fell asleep quickly and slept like a dead woman.

I woke up the next morning and really struggled to haul myself out of bed – but we had planned to meet down at Kelly and Flora’s at 9:00, so we hustled to get packed, showered and make the bed. We got down there and had breakfast, then Jim and Anna hit the road.

Matt decided he wanted to ride a trail in Chattanooga, and Kelly and Flora wanted to take us to lunch at the Boathouse, there. So we caravanned up to the trail (which runs in front of the restaurant and next to the river). Matt biked and we did a driving tour of the city. It’s been a few years since we spent any time there - and coincidentally, it was with Kelly and Flora. It was nice to see what’s going on – a few changes have been made.

We met up with Matt – sat on the deck of the restaurant and had a nice lunch – it was delicious. I had a po-boy and fries – which wasn’t healthy in the least, but my taste buds did backflips, and sometimes, you just want what you want. Flora tells me they have a dessert called the Havana Banana which involves 2 scoops of vanilla bean ice cream, a homemade butter rum sauce, bananas and pecans. I may need to make some of that. I know I’d like to eat some of it. Stat.

We finally left Chattanooga around 4:00, and worked our way back to Nashville.

I picked up Lola this morning. She smelled a little funky, but otherwise, she is home and glad of it.