on July 29, 2009
I had lunch today with my old boss Joe and my colleague, Joey. I've seen Joe once since he departed this world for another - at the April Flight of the Conchords concert with his wife, Karen. I see Joey several times a week, but he is still equally important.

The reason for his visit up to these parts was that, since we're about to leave our current building, he wanted one last meal at La Terazza. It was actually only my second meal there, but it was right tasty.

I had meant to take a picture, but ended up not even bringing my purse, which, naturally contains the camera.

So in lieu of that picture, here is one from December 2007: 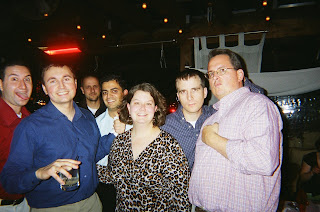 I am the only female in the photo - to my left, in the blue shirt is Joey, and to his left is Joe. Aren't we a handsome bunch? The rest of the fools in the picture aren't relevant, but they are, from L to R: Nick, Alex, Dennis and Manish. None of them work here any more.

Note to self - gotta get back down to that weight, then lower.