on June 25, 2009
So, Anna (aka Zumba Anna), her neighbor Laura, and I all trekked over to East Nashville for a Zumba class with a woman named Jenny, who Anna had taken with and enjoyed – she described Jenny, aptly, as a “Wood Nymph”. She was great. The music was excellent, the moves were fun – the only bad part was that the class took place in the gym – or, half the gym – the other half was curtained off for basketball – which would have been fine – had the air conditioning not been broken. That was brutal. I’m STILL dehydrated.

After class, Matt and I met up with Seb and Alex and went to dinner at Athens Family. I ended up eating way too late (healthy), but it was a good time with people who are great company.

Tomorrow I am going to hit the Red Cross on my way into work – they open at 7AM, but I got an appointment for 8, and that should still give me plenty of time to get to work by 10. And with any luck, I can hit the PetSmart on the way in to look for a life vest for Lola. Silly? Sure – but I didn’t raise my dog carefully for the last decade to have her perish in a tragic canoe accident. And you know I’m right.

So, I saw an armadillo yesterday on my way home from work. Dead, on the median. But completely intact, so I know for sure for sure it was an armadillo. I can’t believe that they’ve made it this far north. Growing up, armadillos were my favorite animals. 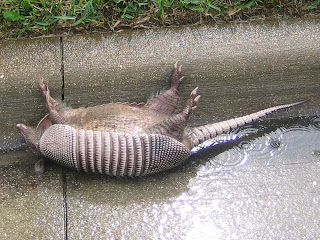 I have armadillo earrings (sterling), a pin (pewter) and little carvings in wood and stone of the little guys on my knick-knack shelf in the bedroom.

By the way – shrinks love it when you tell them that the armadillo is your favorite animal. You can see the dollar signs in their eyes. I’m just saying. Anyway, I was equally sad and delighted – sad that it was dead, delighted that armadillos now call Nashville home.

Matt did a boatload of yard work yesterday (and got a new driver’s license, and gave blood) and the place looks awesome. Even my peppers are starting to produce tiny little nibblet sized fruits. You heard me – the pepper is a fruit. I checked. Online so it must be true. I actually checked several sources online, so I figure it has to be more or less correct. Tonight, I need to fertilize, water and stake up an errant plant.

I have to tell you, I need to stop checking Facebook before I go to bed. I had the weirdest dream last night about all my old HS classmates. Actually, it’s been a full week of weird dreams. But at least I’m sleeping enough to dream. I guess.

I did two training sessions yesterday and received complementary e mails after both from the person in charge on the client side. I decided to send them to my boss this morning, because, well – I can. And he needs to know what an asset he has sitting right next door to him.

My tribal elders are doing well. I talked with them yesterday. Mom is enjoying her new foray into retirement so far – though I think it’s only a matter of time before she branches out and does some volunteer work, or maybe a little job or something. I mean, when you have hair as gorgeous as my mother’s, you really need to get out and be seen – it’s more a public service than anything else, when you think about it. Dad is in cardiac rehab classes at the hospital, and he’s really enjoying it. Mostly, I think, because he has an audience – the little old ladies giggle at his antics constantly. He’s working hard though, and starting to build back up a little – to say nothing of the fact that he has found some people who can validate his feelings and give him a new sense of what normal should be.

Dad’s garden, incidentally, makes me gnash my teeth with jealousy. He has both zinnias and marigolds (two of my wedding flowers), gorgeous mandevilla, geraniums and hostas. His banana trees are producing bananas – inedible, true, but still – bananas. Their bamboo would make a generous gift to Ling-Ling and Mei Lan over at Zoo Atlanta. It’s a tropical paradise, and their shady screened porch is the jewel in the crown. Someday, maybe…

So, I had the chance a few weekends ago to meet my friend Rese’s new baby – and she was all of about 9 days old. I watched my colleague Bethany hold her with a beatific smile, I watched Natae do the same. When it was my turn, I broke into a sweat. I just wasn’t cut out for motherhood, because all I could think was “I would be so exhausted – this is terrifying – college tuition, braces, skinned knees, skeezy boyfriends, proms, piano recitals, fights over clothes, standardized tests…it never ends”. At which point, Rese rescued her daughter to feed her. That’s good, because I’m sure I was just pouring negative energy onto that baby. Fast forward to this past weekend, Mom was updating me on everyone she knows and their grandchildren - who is pregnant, who wants to be pregnant. It’s overwhelming. I’m just not feeling the biological mandate to reproduce. Ah well – this too shall pass.

Besides, there needs to be someone like me out there to be a mother to the lovely little roadside doggies of the world. I’ve been eyeing Boston Terriers in a big way the past few weeks…nothing against Lola, but you know, I like to have information at the ready. I’m sure we’ll end up with a pound hound, and that’s perfectly fine with me, but there’s something très charmante about the pugs’ über-willingness to be up on your lap that makes me think we should be checking out the smaller, sweet-as-pie breeds. I’m sure Matt is thinking something more like White Fang. Which is why we’ll probably need two dogs to replace Lola, when that time comes. And I hope it’s not any time soon.

And that, my friends, is that. For now.
armadillo dog Family friends travel Zumba