Yesterday, during a smoke break, N, my friend/colleague and I were talking about people who can't be happy, and I said that even though I bitch about things, I tend to think of misfortunes as a source of "good material".

Several hours later, I hit the motherlode of good material.

A tornado touched down two blocks from our office building, then ripped off part of the roof on our building and scattered debris throughout the parking lot. Which looked something like this: 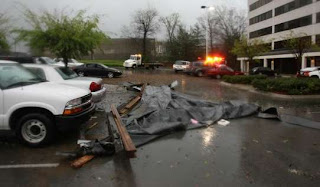 Which, in and of itself was pretty interesting - but what's even more interesting is what happened to the cars in the parking lot: 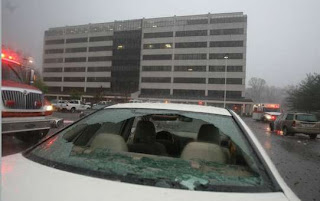 And of course, the most interesting is what happened to my car: 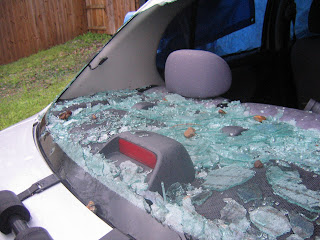 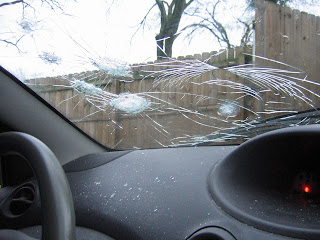 In total, I lost my back windshield and rear driver-side window completely and my front windshield is intact, but a hazard (see above). I also have some dings from where the rocks hit the roof and hood.
Now, sure it's not convenient (or smart) to drive home with a windshield that's been hit 18 times, and I'm not thrilled that I have to pay a $100 deductible. But insurance covers 80% of my rental - a lovely, sporty little Ford Focus - RED! Vroom!
And OK - I missed Zumba this morning, but I kept my hair appointment. And my hair looks great, incidentally.
And, yeah, Matt is going to kill me when he sees what I did to the yard trying and failing to get it out of the mud. I don't blame him. I'd kill me!
But I'm OK. We're all OK. Sure, cars were dinged, there's crap all over the parking lot and my yard looks like a bowl of chocolate pudding with some grass thrown in. But I didn't get hurt, nobody got hurt. Amazingly, nobody was hurt.
And I could feel sorry for myself and think "why me?", but what's the point? Insurance is covering the damage, the grass will grow back and most of all - I have a great, great story to tell.
So, when life hands you a tornado, buy some lemons and make lemonade. And throw some tequila in there if you have it handy.
Say, have I ever told you about the time that a tornado hit our office?
Echo happiness weather