After talking with Dad, he strongly recommended using traps rather than poison. I can't argue with his logic - namely, if a critter chooses to die in an undisclosed location before leaving the premises, we would have a rotting, hidden corpse to deal with.


So, I bought some traps, baited them and left them in the "problem areas".


When I came home from work yesterday, I found my first kill. It looked something like this: 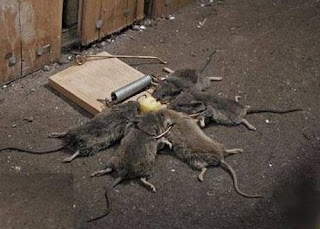 I'm kidding - it was only one little cute, gray, furry little guy - I named him Smudge.


So I put on some gloves, interred the remains in the garbage can out in the alley, and reset and replaced the trap.


When we got back from the Y, we found another victim. Again with the gloves, interrment, etc. I didn't name this one.


I called Dad to tell him and he suggested that since I'm now a killer, I should get a tattoo of a tear in the corner of my eye - but to up the ante, it should look like a tear until you get close up on it, and then, it's actually a mouse. And people wonder where I got my odd sense of humor. Pretty funny.


That said, I do feel guilty. Matt and I talked it through though - realistically, we can't have mice in the house - it's just not going to happen. Of course, that doesn't make being a cold-blooded assassin any easier...


No new body count as of this morning - and this will be the last I blog about it.


You can simply assume that from this point on, everything rodent is under control.