on December 12, 2008
So pretty much all of Metro Nashville and surrounding counties called a Snow Day. It snowed last night, some of the roads are icy, and voila. Three day weekend.

Personally, I'd love to have the day off. I need to finish up some Christmas shopping, the house and laundry situation are dire. We need clean clothes, then, once they're clean, I need to put them away.

And I've got to get cracking on the baked goods. This day would be ideal for that.

But, I don't have training today, so this would also be a good time to clean out the inbox, hunker down on a few lingering tasks, and maybe see if anyone wants to leave the building for lunch.

The bossman is working at home today due to the road conditions and the traffic resulting thereby. But the rest of us are here and it's all good.

I don't know what Matt has planned for the weekend - what I have planned for him is some errands to pick up a few presents. Money for the ones we're giving cash to. A present for the next door neighbor, something for his best friend and his best friend's teenage son. I suggested movie tickets and a gift cert for dinner so that he and his girlfriend could make a date of it.

Mom has given specs on what she wants, and that's easily done. As for Dad, well, the conundrum continues. Like my brother-in-law, and my husband, if there's something he wants, he'll get it for himself. And that leaves me...well, screwed.

Nice fancy smell-good soaps are an option, but that's not really much. He has clothes, CDs and DVDs we've bought him in years past sit unlistened to and unwatched. He's still awaiting cataract surgery #2, so books are kind of a waste. I can't see buying foodstuffs for a recovering cardiac patient - ditto alcohol. Aside from which, he already has those things.

I did see a kit that is a frog habitat that allows you to mail off for tadpoles, then you raise them, but that seems both juvenile and labor intensive.

He doesn't wear bathrobes, he doesn't need slippers - and his cabin in the mountains is so decked out, nothing sticks out to me there.

I've given Dad two great presents in my lifetime. One was a neon Foster's beer sign featuring a crocodile - the other, we found in the basement of our house 3 years ago this month. We had just moved in, and we were scoping out the basement, which, because we access it from the outside of the house, we have been told is technically a cellar.

We were looking through a set of cupboards which was used back in olden days, I would suspect, as a canning pantry.

We pulled an old bottle out of the cabinet. It had a manufacturers label with a homemade label stuck over most of it, so that all you could see at the end was "ted".

I said to Matt, "Wouldn't it be something if that were a Delited bottle. Delited being the Jams and Jellies (and other condiments) company owned by my great-grandfather, Julius Breyer.

Matt worked on the damn thing for an hour, slowly removing the homemade label, and sure enough - it was a Delited bottle.

We cleaned it up, wrapped it and gave it to Dad. As presents go, it was one of the good ones.

That doesn't help me in the here and now... 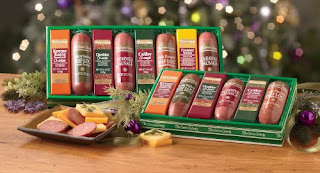 Or I'll have to get him a Cheese and Sausage Sampler from Swiss Colony.

Actually, back in my college days, that was a pretty nice thing to take back to school for late-night snacking.