on October 28, 2008
In the back of my mind, at some point I must have made the connection that new CD, DVD and Video Game releases happen on Tuesday. This was something that on some level, I knew, but it never served as information that affected me until Matt came into my life.

When we first started dating, Matt worked 1PM – 10PM as a news photographer, meaning that when he was getting off of work, I was very often copping Z’s, one time zone earlier. Back then, Tower Records was still around, and on Monday nights, they stayed open until midnight to sell anything set for Tuesday release. Though the specifics escape me, I know that on several occasions, Matt would drop by after work to pick up a CD or DVD of special interest.

Once Matt left news and picked up more regular hours, late-night trips to Tower slowed considerably. We still went to Tower, but mostly now on weekends. Shortly after we got married, Matt was out of town on some kind of work trip, and I stayed up late for a Midnight Run. The new season of Arrested Development was out on DVD and I wanted it. Well, as it turns out, they were having a late night concert at Tower, and I picked my way through the crowd only to learn that they didn’t have the damn thing. I ended up getting it at Target the next day. Curses!

But that was nearly 3 years ago. Since then, Tower has ceased to exist (as has Arrested Development, RIP) and we have aspired to keep more regular hours.

Until last night. For some time, Matt’s been excited about the release of the 3rd installment of a game he has been playing for at least a decade. Fallout 3 came out at midnight last night. Matt has had it on pre-order at the GameStop since September, and when he got a reminder call over the weekend, they mentioned a Monday Midnight release. 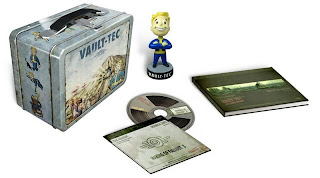 So, as the nightcap to our vacation, we bundled up and trudged down to the GameStop, where we milled around with a dozen other geeks and picked up the collector’s lunchbox, containing the game, a book and a bobblehead. I scanned the room and named Matt “Most Likely to Get Laid”. Nothing against these guys – I married a member of the AV Squad – it was just funny. Suffice it to say, I was the only XX Chromosome in the place.

Matt didn’t start the game, and won’t until tonight, but I’m glad he’s excited. It will give him something to do while I strategerize about Thanksgiving. Which is now 30 days away. One pressing matter is settled, and that’s the ham – Dad found a smallish one. We don’t need it, but it breaks up the monotony from turkey, and Dad’s hams are…well, they’re amazing. Plus it means that Matt gets to play with fire, which he loves.

What is it about men and fire? On a recent camping trip, Matt and our friend Robert were obsessed with poking the fire. Tracey (Robert’s wife) and I commented that with guys, they live for that – poking fires as well as poking…well, other things. Never mind - it was kind of dirty, but you know I’m right!

I finally settled on a Halloween costume. I think it’ll be fun, if I can execute it. I spent a little money at Goodwill, Walgreens and Michael’s. I’ll leave it at that for now. I like to keep ‘em guessing. It’s not going to win any prizes, but that’s OK by me. I’m in it to represent my department, whose esprit de corps is sagging. And as a member of the People’s Committee (the sponsor of the contest), it’s my duty.

The election continues to keep my attention. Georgia is now a tossup, and that leaves me hopeful. Much in the way I felt 16 years ago, the first time I voted, and when Bill Clinton mopped the floor with Bush père. We had dinner with my parents over the weekend, and my father remarked that this was the most exciting election of his lifetime. And this is a man who was born under FDR – who lived in the time of Truman, Eisenhower, Kennedy, Nixon… a man who took a train to Washington DC for Jimmy Carter’s inauguration, and he’s excited about this election. That in turn excites me!

In other presidential news, I share a birthday with Teddy Roosevelt, and he’s an interesting character in history – I should read more about him. But I did like his devotion to maintaining National Parks. He was Green before they even called it Green. In some ways – apparently, he was also something of a scrappy little bastard.

What can I say? October is a time for movers and shakers.

Speaking of, since I was feeling a little off last night, I didn’t get anything resembling a birthday cake (or dinner, for that matter) – I’ll rectify that tonight. Although, word on the street is, my triglycerides are a little high. Meaning I'd be smart to avoid sweets. Um...really?

Oh well! The rest of my cholesterol is in great shape, which means I'll be ordering that Hickory Farms Cheestravaganza Basket after all.

Mary Conklin said…
You probably won't even get this message but for the record... I love fire too... rock on Matt. Also, your dad's hams are the be all end all... Sarah and I the other day were talking about how we want a "Bill Ham" which is what Gaga always taught us to call it... I'm sure you all do too...