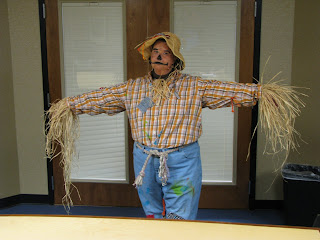 We got to dress up for work today - we had 2 Sarah Palins, one with a hockey stick, one with a fake baby and a drill.

There was also a guy dressed up like a Tom-Tom (whose name happens to be...Tom - nice!).

Several bees and a beekeeper, a woman covered in bread with a "winner" sign attached (get it?), a Pac Man and Ms. Pacman, and yours truly, the worlds' most awesome scarecrow.

Seriously, I'm pretty proud of this one. And who knows, maybe I'll win a prize?

We also had a potluck - I took a Mexi-Chicken crockpot dish, and so did someone else - ah, well. The desserts were off the chain. Now I could use a nap. And bad news, I'm here for another five hours.

Now that the frivolity of Halloween has passed, I'm starting to focus in on two things - one, my house is a wreck (though I got the kitchen and butler's pantry in working order as of last night) and two... this ELECTION.

And of course, after the election there's Thanksgiving, Christmas, New Year's, the Inauguration, Super Bowl Sunday...

And it never ends.

I don't know - I'm in a damn fine mood today - probably something to do with all the carbs, but more than that, I just feel pretty hopeful. 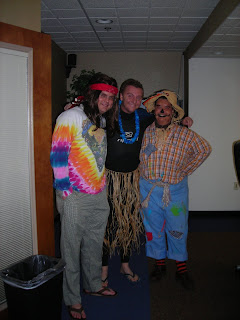