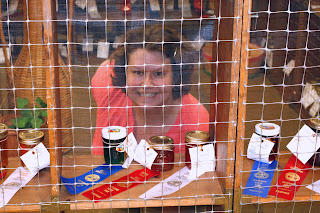 What a difference a year makes!

The scene at the shelves for Lot 10 - Pepper Jelly at this year's Tennessee State Fair could not have been more different for area resident, and second time competitor, Allison Everett, than they were a year ago.

Spectators may recall that in 2007, Everett finished fourth of four - the only competitor to walk away without a ribbon.

After dropping her jelly off at the Ag Building of the fair grounds on Wednesday, she was cautiously optimistic. With only one other entry on the shelves for Lot 10, and only three hours til the deadline, Everett felt that her chances at placing were not a lock, but certainly promising.

When she came to the shelves Sunday afternoon, she was in for a pleasant surprise. There were in fact, six entries in the category, and her entry had placed a solid third, garnering her a white and gold ribbon.

"Initially, I had thought there were only three entries, and that would have been a hollow victory, though I'd have been glad to get it nonetheless. When my friend pointed out the shelf below mine with three other jars, I'll admit - I could have cried with joy."

A quick scan of the Lot 42 shelves for her second entry [Creative/Unusual Jelly] indicated that her Fiery Pineapple jelly did not place, but nothing could ruin Everett's ebullient mood. After a protracted photo session, Everett and her entourage made their way to the goat pen, where she proceeded to pet the goats benevolently. If the goats knew that they were in the presence of jelly royalty, they never let on.

When a call was placed to her parents, their first reaction was sympathetic laughter, but when they realized that their daughter had legitimately won her ribbon in a competitive fashion, laughter was replaced with congratulations.

One ferris wheel ride, and one trip to the face-painting booth later, Everett sank exhaustedly onto a picnic bench and reflected on her day:

"I couldn't be happier. My jelly won a ribbon - the prize money will recoup the cost of the jars, and you know, it just feels good to win. Plus, the face painter did an awesome job, the dude at the Guessing Booth thought I was born in July [her real birth month is October], so I won a prize, and I even got to try deep fried Oreos, which, by the way, aren't really as good as plain Oreos. Word to the wise. All in all - it was a great day, and I'm glad I didn't give up last year when it would have been easy to quit."

But success has not changed this Nashville resident. "Oh, I'll be heading back to work on Monday, just like the folks whose jelly didn't win. I'll keep on growing peppers, making jelly and spending time with my loved ones. That's just who I am, and the ribbon doesn't change that."