on September 28, 2008
I've received some feedback that there's not enough Henry on the blog. And that may be.
But since he's at an age where he can't offer insight on current events, there's not much to say.
Well, until this morning, anyway. 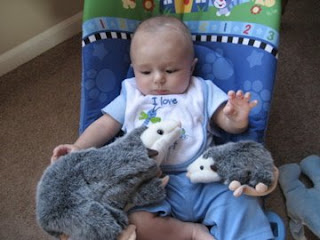 Laura sent me some pictures, and while I'm happy to point out that he's wearing the "I Love My Aunt" bib I bought him (in tandem with the "My Uncle Loves Me bib"), he is, I am sorry to report, consorting with the enemy.

That's right people - Henry has befriended some possums.
The two in question were a pair given to Henry from Dad - I think he likes them. The big one is a hand puppet, and the baby is a finger puppet.
I feel sickened, but Henry is his own person, he can do what he wants. 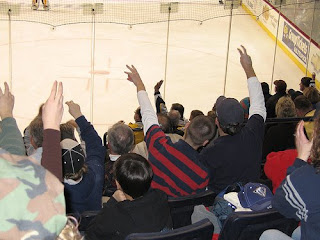 We went to the Preds game last night, which was awesome. We got to make Fang Fingers - which is cleaner than it sounds. It's the hand gesture made with the index and middle finger and by flicking the wrist when the Preds are ON...THE...POWERPLAY!!!! Preds were on the Powerplay a lot, and they beat the Columbus Blue Jackets 3-1.
The poison ivy seems to be clearing up.
Matt and I have work to do outside today, but I have spent time working on work stuff, too.
Good thing - I have a lot to do in a short timeframe.
I'd give my soul for a nap. Oh well.