Jam up and Jelly Tight 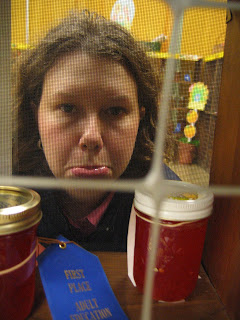 So I'm dropping my entry form for the 2008 Tennessee State Fair into the mail today. Last year was the year of the pepper jelly fiasco. Submitted for your pleasure, reprint of the press release:

In what can only be described as a stunning turn of events, urban gardener and jelly enthusiast Allison Breyer Everett, of Nashville, TN placed 4th in today's judging results at the Tennessee State Fair. Everett had entered a jar of her pepper jelly into competition on Wednesday.

The defeat is made all the more bittersweet with the knowledge that there were in fact, only four entries.

"I think it would have been less disappointing if there had been a dozen entries," said Everett from her Acklen Avenue home Sunday evening. "Because I came in fourth of four, there's a lot of self doubt - I mean, should I have entered a jar from a different batch? Would I have placed if I'd entered the green jelly instead of the red? I'll never know."

When reached for comment, Everett's mother, Lucy Breyer of Roswell, GA said, "I can't believe she didn't win - her paternal Great-Grandfather, Julius Breyer, owned a thriving jelly-making business in Nashville [Delited Jams and Jellies, which eventually sold to Bama]. In fact, he too, lived on Acklen Avenue. She had everything going for her!"

Everything, perhaps, except prize-worthy jelly. Her father, William Breyer, initially didn't wish to comment, but eventually reluctantly admitted, "She has shamed our family."

For now, Everett consoles herself with a ribbon she purchased at the local Dollar Tree. "It says 'Wow' on it," she says ruefully. "They only give out ribbons for 3rd place on up, but I really wanted something to show for all my hard work. I mean, I made three batches of jelly. In the heat of August. With habaneros that I grew in my own garden. Have you ever tried to grow anything in this limestone? Have you?! I mean, isn't that worth something?"

Everett's husband, Matthew is skeptical, "I told Allison that ribbons are only for winners, but since she believes in her heart that she deserves a ribbon, and since it was only a dollar, I figured, why not?" He also offered to flirt with the octogenarian judges next year to ensure Allison's place in jelly-making history.

For now, she consoles herself with the knowledge that failure is not falling down, but staying down. "I've already started planning for next year," she says "Aside from which, I have three cases of pepper jelly that I'm planning to give as gifts to my friends and family for Christmas."

When asked if her friends and family would be content with a jelly that carried the stigma of being merely mediocre, Everett shrugged. "It's not like there are tons of uses for it anyway. I expect most people will hang on to it for a few months out of a sense of duty, then they'll toss it."

So that's what I have to live down. I'm doubling my odds by entering into a second category - Most Creative/Unusual Jelly...I can't say just yet what that will end up being, but I'm pretty excited. The plan is to start on it this weekend. Next weekend is the annual Weekend on the Water - we're canoeing the Harpeth/Camping again with some friends - the weekend after that, I'm headed to Atlanta to hang with my Dad (Mom's off to see her grandbaby), and the weekend after that, it'll be time to drop the jelly off.

Where has the year gone?

Along those same lines of "unbelievable", we're closing in on our 3rd Anniversary. Leather. Or Crystal/Glass... So, a buggy whip and a Crystal Gale or Phillip Glass CD?

Unknown said…
I was googling "delited" glasses, and ran across your press release, which helped clear up the mystery.
Thank you so much!
October 7, 2010 at 10:23 AM