on June 02, 2008
So the results from Lola's DNA test are in.
Leaving me only somewhat enlightented and mostly amazed.

Here's the way it works - they measure primary, secondary and in the mix breeds.
Lola is not enough of any one thing to have measurable primary or secondary levels. Or, at least, if she is enough of any one thing, it's not one they test for (like Pit Bull or Jack Russell).
So what they found was four "in the mix" results:
- Unknown Terrier (Um, I could have told you that - what I paid for was a known terrier...)

- Boston Terrier (Bingo - this was on my list of suspects!)
- English Setter (Ok, that would explain some of the markings, the pointing, but still, a surprise.)
- Tibetan Spaniel (What the hell? I don't even know what that looks like!)

So a quick check of the old Google turns up this: 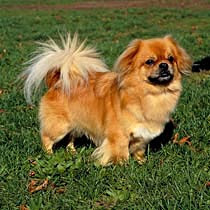 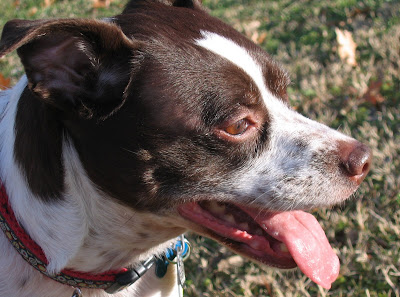 The bigger question is...well...honestly, there are so many questions.

What exactly do they mean by "Unknown Terrier"? Pit Bull? Yorkshire? Rat? Jack Russell? The thing is, if you happen to look at the Terriers on the AKC site, they have every size shape and color covered. I think we can probably rule out Manchester, maybe Kerry Blue and Sealyham...or can we? Who knows.

The next question is, where did Lola come from? As you may know, she was found, by my mother and father on a dirt road in the North Georgia mountains. There were no nearby houses, and she was a six week old puppy. Was she dumped? Did she run away from home?

If in fact she was dumped, things start to make a little more sense. One doesn't let their Tibetan Spaniel roam free as one might, say, their Unknown Terrier. But the fact is, none of these breeds make up a significant amount.

So, who knows. I may eventually spring for the blood test DNA to go along with the cheek swab.

But for now, I'm a happy owner of a Tibostunk Terrietter. Which is to say, a mutt.