Plus, if you act now, you get a free bamboo steamer!

on June 18, 2008
When Matt was in first grade, one of his classmates taunted that he had “funky feet”. I don’t know about back then, but now, nothing could be further from the truth. For a guy with size 13 – 14 feet who spends most of his workday upright, his pedal extremities are as soft and smooth as a baby’s butt. It’s completely ridiculous and unfair!

I say this because I have…funky feet. It’s not that they smell bad. It’s just that they’re dry, scaly and cracked. Even the women working at the nail places I frequent for pedicures have commented, and I have to figure, they’ve seen it all.

A few months ago, I saw an ad for this contraption on TV. It looked kind of intriguing. And though I know that these gadgets things are a dime a dozen and don’t usually work, I finally gave in to my curiosity. It cost $9.98 at my local Walgreens.

So basically, it’s a small plastic egg-shaped device outfitted with a cheese grater which (in theory) grates the dead skin from your feet and traps it in the egg so that you can dispose of it neatly. That said, Matt took one look and sent me to grate away outside – he didn’t want to end up with foot dust all over the floors. So I took my egg and went out on the back deck.

The first thing I want to point out is that on the package, it claims that it “Gently Removes Callous, Dry Skin”. Now I looked it up in the dictionary, and technically, callous is an adjective mean hardened, but on the other hand, the more common usage means “indifferent”. So that amused me. My skin is a great many things, but indifferent isn’t one of them.

So, because I’ve been working in the garden a lot (in flip flops) my feet were looking especially rough.
And after ten minutes with the Ped Egg…

They looked even worse.

I dumped my skin remnants onto the grass, packed up my Ped Egg and went inside, where I proceeded to use an old-fashioned method for smoother feet. I scrubbed the hell out of my feet with a nailbrush, then got out some Vaseline and a pair of socks. I slathered the feet with Vaseline, put the socks on and kept them on until bedtime. What do you know? Smoother, less hideous hooves! And way cheaper.

So, I’m not saying the Ped Egg doesn’t work. I’m saying it doesn’t work for me. At least, not right now. Right now, I’m thinking of looking for a belt sander.

The take-away from all this is, just because the commercial makes it look awesome, doesn’t mean it’s awesome.

Except for the Snoopy Sno-cone Machine. Which really is as awesome as the ad makes (or, made) it out to be. You put your ice cubes in and get a sno-cone out. Yum, yum fun is what it’s all about! 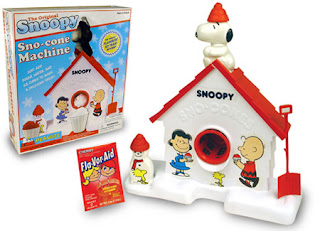 Weird that the two products mentioned both involve a shaving mechanism. Warning – do not mistake one for the other, or you’ll be eating shaved foot with flavored syrup.

Unknown said…
I have been curious about the egg - I'm going to stay far away - thanks for the product testing! And thanks for the wonderful flashback to the snoopy sno-cone machine!!
June 20, 2008 at 10:06 AM