on June 16, 2008
So, with wedding season being in full swing and because it’s been a slow day, I thought I’d retell the old chestnut about how I got my wedding cake on the cheap.

In May of 2004, Matt and I got free tickets to a charity event held by Prevent Blindness Georgia. It was a beer tasting near Piedmont Park with hors d’oeuvres, good music, and a silent auction – this is where our free tickets came in – they were a thank you for the contribution my employer made to the event – for the auction – a LASIK surgery by our head surgeon. So anyway, Matt and I are eating, drinking, having a good time. Drinking. Talking. Drinking. The beer was free and it was great. Drinking.

Matt and I decided that since we were at this event gratis, we should bid on something. We split up and cruised the auction tables. I saw what I wanted, and met up with Matt and told him. What I wanted was “Tiers of Joy” – a wedding cake for 150 guests from Avante Catering. The minimum bid was $50, and no one had bid yet. I should point out that Matt and I were not yet engaged. But, we were planning to marry…eventually, and we had been drinking. Matt assured me he was fine with me bidding on the cake – he was going to bid on a magnetic dart board.

The evening progressed, and as it turns out, my minimum bid was the only bid. I won a ginormous wedding cake for $50. Matt was outbid several times on his dartboard.

When we told friends and family my good news, they all made jokes about the cake going stale. Ha, ha. Thanks for the vote of confidence, assholes!

Matt and I got engaged that September and in December, I put in a call to the caterer to see if the offer was still good. She said it was, and in January, Dad and I went to a tasting. I ended up with a simple cake – three round tiers in vanilla, buttercream icing, and fresh flowers as the decoration. She did charge us a $25 delivery fee, but when Dad asked and was told what he would have paid for a similar cake, he was pleased. Plus, although I didn’t claim it, my donation to Prevent Blindness was tax deductible. Heck yeah! 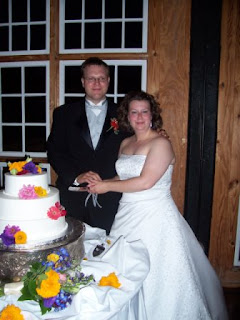 As for the cake, it was pretty damn tasty, if I say so. And there was a country ton of it. We ate more at my parents house the next day. I think they ended up tossing a lot of it.

For what it's worth, as a groom's cake, Dad made Matt a few of his special rum cakes - equally affordable and delicious!

As for the top layer you’re supposed to eat on your first anniversary? Well, we forgot to take the flowers off the top before freezing it. Plus, we had to transport it from Atlanta to Nashville in the heat of the summer. We ended up tossing it when we got settled in to the apartment.

So that’s my wedding cake story. I’ve got a million others… for another time, though.

As a postscript – because I love Matt, I did give him a magnetic dartboard for Christmas 2004, which I believe he has never used.