on May 27, 2008
We spent the weekend in scenic Florence, Alabama. It's about a 2 hour drive from Nashville, and we took the scenic route - which took us through Ethridge, TN - home to a small Amish community. The horse and buggy seem to me to be a viable way to decrease your monthly spending on fuel. Hay has to be cheaper than regular unleaded, right?

Anyway, upon our arrival into town, we hit two of the area cultural high points - first, the WC Handy birthplace and museum. WC Handy was known as the Father of the Blues - the docent at his museum, Sandra, is a retired English teacher and music historian. We were the only visitors at the time, so we got a great tour and talked with Sandra for a while. She recommended we take the short drive to the Alabama Music Hall of Fame. We took her advice and I'm glad we did! That museum has all kinds of neat things - including several costumes worn by the Commodores, a tour bus donated by the musical group Alabama, a juke box full of songs recorded in Alabama, and so on. It was interesting.

We met up with the family at the hotel, and all I can say is, wow! I usually tend to travel cheap. I'm fine with basic accomodations, I've done the hostel scene, and really, I'm not picky. So compared to my usual lodgings, this place was ten kinds of gorgeous. They had a beautful lobby - marble floors, a fountain. The room was huge, clean, quiet, attractive - and the beds... about a month ago, I was jonesing en blog for one just like it. Huge, cool, clean white sheets with a high thread count. Mountains of pillows at every level of firmness. I could have crawled in and stayed all weekend.

But I didn't. Instead, I threw on my bathing suit and headed down to the pool. 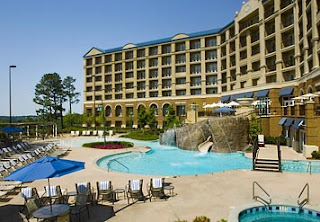 Honestly, this photo doesn't do it justice, but damn, I could have parked my carcass at the pool and stayed all weekend. There were eleven of us in the group, and ten of us went down the waterslide (at least once) - from cousin Hannah, age 13 to Uncle Kelly, age 74. Only Aunt Flora abstained, and as the matriarch of the family, that's her right.


We hung out at the pool, got dressed and went to dinner at the hotel's restaurant. I had some She-Crab soup that was like liquid velvet.

We slept that night like we haven't slept in months.

Sunday morning, Flora, Kelly, their son Jim and his girlfriend Anna, met up with us and the six of us went sightseeing. We took a look at the dam, went to the Frank Lloyd Wright house in town, then headed back. After a nice nap, we went back down to the pool and stayed there chilling, snacking and talking. Around 9PM, they set off some fireworks and then we went to bed.
All in all, a good chill weekend. It's nice to marry into a great family like Matt's - it makes my life easier.

More soon - I'm trying not to let my first day back undo all the good that this weekend did.

So far, though, the day is winning.